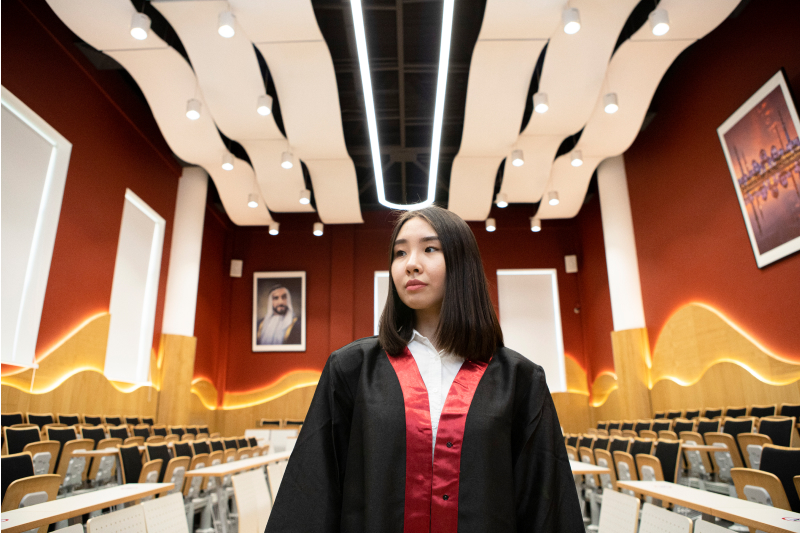 On May 24-25, Master’s students of the Higher School of Economics presented their dissertations. Their works were evaluated against several criteria including coherency and a research question, appropriate research technique, ability to provide insights, and quality of recommendations.

Tolganay Umurzakova, Master’s student in Economics, conducted research to reveal the effects of skills mismatches on job satisfaction in Kazakhstan. The impact of education, gender, and sector of employment on job satisfaction was examined as well. Primary data for skills mismatch and job satisfaction indicators were sourced from the OECD Survey of Adult Skills (The Programme for the International Assessment of Adult Competencies – PIAAC). The Survey measures adults’ proficiency in key information-processing skills – literacy, numeracy, and problem-solving in technologically rich environment – and gathers information and data on how adults use their skills at home, at work and in the wider community (OECD, 2019).

There are several interesting results of the research. Firstly, an extremely high rate of skill mismatch among respondents from Kazakhstan is revealed. Most respondents think they do not have proper skills for their job but rather consider themselves as over-skilled, wrong-skilled and under-skilled. Secondly, the job satisfaction rate is unusually high as well. Thirdly, the results suggest that skills mismatch does not have a statistically significant impact on job satisfaction. However, the probability of job dissatisfaction is found to be negatively correlated with education: people with a higher level of education are less likely to be dissatisfied with their work. The sector of employment also has a great impact on job satisfaction.

Borrowers and lenders are allowed to interact through P2P lending platforms online without a presence of a strong intermediary such as conventional banks. Nevertheless, as P2P platforms promote wider financial inclusion, the market is also characterized by the issue of higher levels of information asymmetry than that faced by traditional banks. For said reason, Marat’s thesis studied how well can the individual investors deal with information asymmetry by the means of machine learning default prediction modelling data provided by Lending Club P2P platform. To that purpose, he chose Random Forest and XGBoost machine learning classification algorithms for experimental part of the study, with Logistic Regression classifier as performance benchmark. His study emphasizes the use of appropriate performance metrics in presence of class imbalance, but also fair and transparent interpretation of the classification results. Next, Marat conducted a thorough and transparent data preparation. In the experimental results, the performance of the chosen classifiers is compared between themselves, with no significant difference between them to justify their ranking. Additionally, the results of premier classifiers of six related works are showcased, and the similarity of these results generally coincides with those of Marat’s research. However, unlike the related literature, his study further introduces the thresholding technique for the prediction results, which is illustrated to be capable of reducing the number of misclassified loan defaults, providing the opportunity for higher and more stable portfolio returns for the individual investors. Although Marat demonstrated how machine learning classification algorithms combined with thresholding technique can provide reasonable results for the investors, the observable consistency of the prediction results across the field suggest that the type of data provided by Lending Club may be insufficient to build machine learning models of high predictive power. Thus, he underlined the need for wider use of alternative data in P2P lending market.

Rayimbek Smadinov, Master’s student in Finance, conducted research under the title «Impact of the COVID crisis on abnormal return M&A both on the part of acquiring companies and on the part of target companies in comparison with the non-crisis period». During crises such as the current COVID-19 crisis, the number of mergers and acquisitions decreases, but the most profitable deals are made during the crisis. This study aims to determine whether an abnormal return rise of a company’s stock occurs during a crisis. In this study, 28,402 M&A transactions were initially selected from the period from 2018 to the end of 2020. The event research method and regression analysis were used as methodologies. The results of this study showed that during crisis periods, in contrast to the non-crisis period, there is a significant increase in abnormal return both on the part of the target company and on the part of the acquiring company. Also, as a result of the regression analysis, it was found that, in addition to the crisis, the abnormal return is rather strongly influenced by the method of payment with which the buyer company will buy out the target company.

Kuralay Akimbekova, Master’s student in Management Accounting, investigated the topic of ESG and corporate finance. It is known that issues of sustainability and responsible investing play an important role both in the corporate world and in society. Her work discussed the concept of ESG investing, which has gained popularity and importance relatively recently and describes the impact of high / efficient ESG performance on corporate finance, in particular on the financial performance of UK companies. The significance of each of the ESG sub-factors is described based on the works of other researchers. It also analyzed the changes in the corporate world that occurred during and after COVID-19. The purpose of this study was to clarify the importance and necessity of investing sustainably in ESG by supporting qualitative arguments and quantitative data with calculations and assumptions. Basic data came from Bloomberg terminal and Yahoo Finance. To carry out this calculation, the event investigation method was applied, which consists of four event windows. Key results were obtained using the regression method in R Studio. The study revealed several interesting result; and the main conclusion is that ESG related factors play a role during the first six months after the crisis but their influence attenuates the further the date of the actual event.