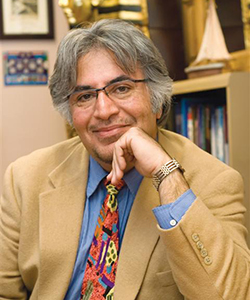 Meet Dr. Alexander Dawoody — visiting American Fulbright Scholar at M. Narikbayev KAZGUU University, Associate Professor of Public Policy and Administration at Marywood University in Pennsylvania, USA.
«It was a delight teaching at M. Narikbayev KAZGUU University during the Spring 2015 semester. I enjoyed meeting the students, faculty, staff and administration and hope for our relationship continues for years to come, including future collaboration between KAZGUU and my home university in USA to foster student and faculty exchange, joined programs of study and research projects.
I am a professor of Public Policy and Administration at Marywood University, USA. My Ph.D. is in Public Affairs and Administration from Western Michigan University, USA. I also have four Master Degrees in Philosophy, Education, Health Administration, and Public Administration, in addition to two Bachelor Degrees in Management and Philosophy from the University of Massachusetts-Boston.
Originally, I was born in Iraq for a Kurdish father and a Turkish mother. I spent the first 18 years of my life in Iraq but while attending the University of Basra in southern Iraq, I had to interrupt my education and join the Kurdish uprising in northern Iraq to escape the former Iraq regime’s persecution of the ethnic Kurds. During the uprising I was a Kurdish Peshmarga (fighter). A year later I was in a refugee tent-camp in Iran before attending the University of Tehran where I learned Farsi, adding to the other three languages that I grew up with (Arabic, Kurdish and Turkish). While at the University of Tehran, however, I was arrested by the Iranian security police for merely expressing simple criticism of the Iranian regime. After spending six months of torture at Aveen prison I was released and was able to leave Iran to Germany and from there to the United States.
I arrived to U.S. at the age of 22, without known anyone in America and having only $5 in my pocket. But with determination and hard work I was able to share the American dream, continue my education and gain significant work experience in the public and private sectors as well as nonprofit management. Collectively this helped me be a better educator, benefiting both from theories and practices in order to teach and prepare my students for new horizons. During my experience in U.S.A I also learned Spanish and perfected my English to a scholarly level. My writings are published internationally in books and peer review journals, and presented in conferences throughout the world, including countries such as India, China, Korea, Australia, the Netherlands, Canada, Mexico, Italy, Lebanon, Turkey, Iraq, Morocco, Spain, Sweden, Azerbaijan, and Honduras.
In addition to teaching in USA and Kazakhstan I also taught in Azerbaijan, China, and Honduras.
I am also an artist. My artistic skills include painting (oil on canvas) while following the neo-impressionist school, calligraphy, and design. I am also a poet and a novelist. I also enjoy listening to music (especially classical and Jazz), opera, theatrical plays, and good films. My favorite artist is Vincent Van Gogh. My favorite composer is Tchaikovsky. My favorite playwright is Shakespeare. My favorite poet is Pablo Neruda. My favorite novelist is Victor Hugo. And my favorite philosopher is Frederick Nietzsche. My favorite book is The Kite Runner, and my favorite film is To Kill a Mocking Bird. People that I admire the most are the Mahatma Gandhi, Nelson Mandela and Steve Jobs.
Issues of peace and coexistence are very important to me. They are more than academic philosophies but rather a way of life and the core of my teachings and perspectives. When one becomes victim of violence as I have, and then experiences continuation of such violence on his family, friends, and people (as during the Iraq wars, the sanction years, the chaos that followed the US occupation of Iraq, the series of terror and sectarian violence, and the recent atrocities and crimes committed by ISISwhere I lost a number of my family members and friends), one cannot help but to fight back. And, the best way to fight back, as the Mahatma Gandhi had taught, is to break the cycle of violence, exposing its corrupt ideology, and work for peace. I address such mantra in my teachings, community activities, research and writings. I also use story-telling, narratives and metaphors to illustrate the cause of peace and help in dealing with trauma. An example of these community-based activities is working on resettlement and empowerment issues with Bhutanese victims of violence around the world as well as refugees in Nepal, and Sudanese, Iraqi, and Kurdish refugees in the United States.
Life is a long-lived short journey. It is best experienced by engaging with one another positively through dynamic networks to leave profound impacts that can be measured economically, socially, politically, culturally or environmentally. Our experiences shape who we are and what our future unfolds. However, and as the renowned American writer Ralph Waldo Emerson had stated, “What Lies Behind Us and What Lies Before Us are Tiny Matters Compared to What Lies Within Us” It is the spirit and determination within us that make us better human beings worthy of respecting and enjoying not only our own lives but the life of all beings on Earth.
Finally, do not go through life as a bystander. Take a position and make a difference, especially during the times of moral crisis. Hopefully what you will decide will be wise and good. But worse than making a bad decision or the wrong choice is having no choice and no decision at all or simply following what others say or do. The Italian poet Dante Alighieri reserves the lowest level in Hell just for people of such characteristics. In The Divine Comedy, Dante writes the following: “The darkest places in hell are reserved for those who maintain their neutrality in times of moral crisis.”»